Reported via desktop in the Grass and Hedges category anonymously at 10:51, Tue 17 November 2020 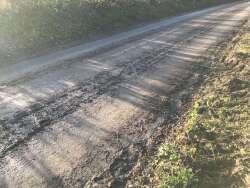 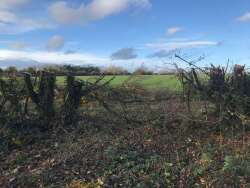 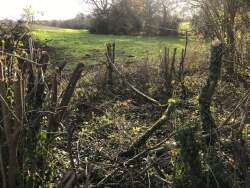 I have some issues to raise regarding the recent hedge trimming/tree felling in Spelsbury.

There are still no signs warning those travelling along the roads, and there is still mud and debris, which becomes treacherous in wet weather (as the comment below has stated). This is concerning given the extensiveness of the work (in which large trees are being felled). Recently, I witnessed a felled tree fall across the road in the path of an oncoming car. The tree was then thrown back over the hedge to avoid a collision. There are no measures to prevent this from reoccurring.

In places, the hedge has been destroyed/removed, which has resulted in the escape of poultry, and allows deer to run into the path of oncoming cars. In one location, the hedge has been removed next to a dangerous bend, making it more of a hazard for drivers. The gaps in the hedgerows also risk the escape of domestic pets into the road. No provisions have been made whilst work is ongoing to improve safety, regarding these gaps.

Spelsbury and the surrounding villages are in proximity to conservation areas/sites of special scientific interest and areas of ancient woodland, and are therefore home to a variety of birds and bats, as well as the aforementioned deer and other animals. The somewhat dramatic nature of this work has resulted in the destruction of their habitats. A number of ash trees, already vulnerable in England due to Ash Dieback, have also been cut down.

Work is taking place on the roads and in the fields immediately surrounding Spelsbury, and has been ongoing for a week or more.

Thank you for taking the time to read this.