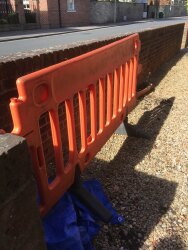 This barrier has been reported before and I was told some weeks ago that it had been removed. This is not the case. It has been there for at least 3-4 months. Located behind low wall in front of Morland Ct flats on Bath St next to entrance to Yew Tree Mews.