Reported in the Pavements category anonymously at 17:39, Friday 17 January 2020 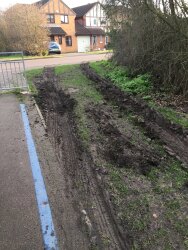 Every time maintenance happens to the footpaths around the local area the vehicles churn up this verge and spread mud across the path. I appreciate that they are doing an important job that benefits us in terms of safety and aesthetics but must they drive vehicles over this verge? The gates should be removable (they have a bolt on at least one side) or boarding put down. They do try and clean up but given the amount of mess created this is just not possible.