30cm pothole in the middle of the Raley Road, at Thrupp Lane Junction 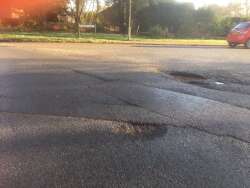