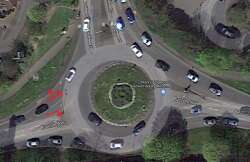 From what I understand of this particular roundabout, the left hand lane should be for going left on to Lockheed Close OR straight ahead to approach the A361 roundabout only, and the right hand lane is to use for the third exit only, to come back on yourself from Ruscote Avenue for those vehicles that can turn left only when coming out of Alid/McDonalds.

There is much debate with Banbury residents on whether the right hand lane can be used for the 2nd exit of the roundabout, however, as the entrance of the 2nd exit is one lane only, I believe I am correct in thinking this should be for left lane users only.