Reported in the Roads/highways category anonymously at 14:24, Fri 28 September 2018 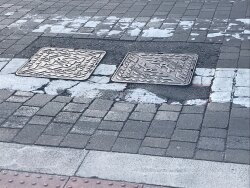 The manholes have been like this for a long time. It has resulted in my 80 year old mother tripping over whilst using the crossing. She has suffered severe bruising to her face and a broken arm